Females are the most underrated yet fastest growing demographic in action sports. I’m not a statistician nor am I a professional in market data analysis, but you don’t need to be either to know that more girls are interested in board sports now than ever before.

My passion for skateboarding and snowboarding began at the age of 13, back in 1997, when I discovered snowboarding in Lake Tahoe and started skating hills around my neighborhood. Five years later, I strategically chose to go to school in San Diego so I could learn how to surf. On the summer weekends, I would cruise the boardwalk in Pacific Beach on my skateboard. I rarely saw any other girls on boards. Seeing another girl on a skateboard was like finding a needle in a haystack. Ask any female who has been shredding for the past 10 years and she will most likely tell you the same. Today, it’s a completely different story. I’m guaranteed to see at least a handful of girls cruise by me on the boardwalk in any given hour. It’s no different at your local skatepark, mountain or surf break. Every time I’m on the hill, I can spot girls from the chair life who are absolutely slaying the park.

When I was growing up, it wasn’t “cool” for girls to shred. I stayed stoked on it thanks to my subscription to SG Magazine and a group of friends who didn’t care about what others thought – we just did what we thought was fun. For the current generation of teenage girls, board sports are much more accepted and normal. These girls grew up watching movies like Blue Crush, MTV shows like Life of Ryan and Rob & Big, the X Games on ESPN and of course snowboarding in the Olympics. Their dads also happen to be the generation of dudes who skated, surfed and snowboarded in the 80s & 90’s. Today, board sports are considered a normal and desirable option for young girls, the same way traditional sports like soccer or tennis was for my generation.

The female demographic is a highly untapped resource. If properly constructed and marketed, females have an immense potential to not only increase a company’s product sales, but more importantly grow their loyal customer base.

It’s valuable for companies to understand that females are “tribal.” It’s common to see girls riding in pairs or crews. We socialize and travel in packs and are highly influenced by our close friends. If one girl in the group is rocking a new clothing trend or trying a new sport, no doubt her friends will be doing the same shortly after. Action sports culture for females is catching on like a wild fire. But don’t take my word for it, take a look at the numbers. 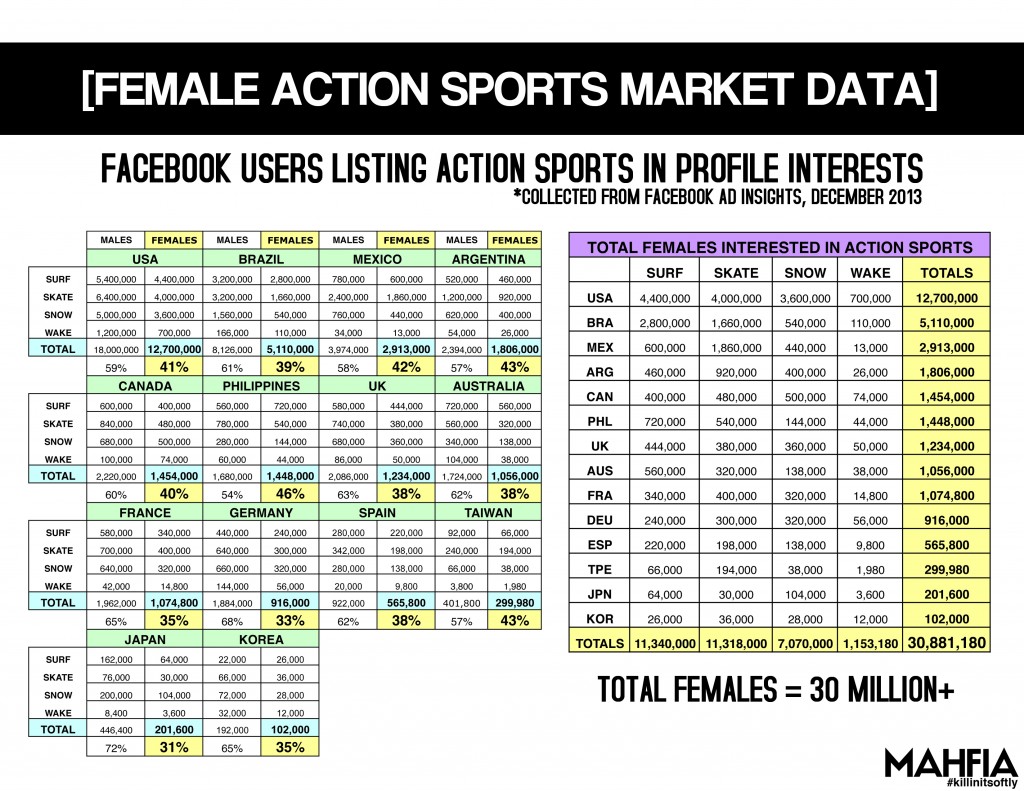 Note: This data is pulled is from Facebook Ad insights. Anyone with a Facebook page can see these numbers. Just go to “Create Ad” and scroll down to “Audience.” You can select filters for gender, age and country and then type in the sport (skateboarding, snowboarding, etc) in the “Interests” box.